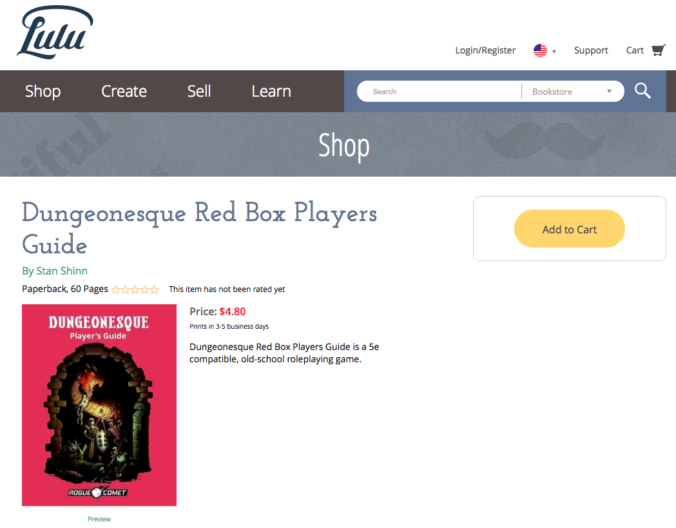 Wanted to give you an update on printing and final delivery of the project. Quick summary is that although I still don’t have final resolution on the DriveThruRPG print cover issue, I have other very good news. I’ve set up a Lulu print-at-cost option for our Print backers which provides even more flexibility! Read on for details.

If you’re a Print backer, you’ll be getting a Backerkit survey email which has a private Lulu.com URL where you can order print-at-cost copies of the Dungeonesque GM’s Guide and Players’ Guide. These come in two versions: stapled booklets or coil-bound (also known as Spiral Bound). Lulu.com copies will be available for a limited time — probably about two months — before I decommission the URLs, so get them while they’re hot!

Many folks are using Dungeonesque now in their home games, so I’m releasing these print URLs to backers now, even though my proof copies have not yet arrived. I’ve done a lot of printing through Lulu.com through the years, so I don’t expect there to be issues, but to be on the safe side, I’d recommend you not order copies until about two weeks from now after I’ve seen the proofs and send out an update confirming how the proof copies look. But, if you don’t mind being on the bleeding edge of new products, you’re welcome to go ahead and order some of the books. Unlike DriveThruRPG, these aren’t single-use codes, you can order as many of these copies as you like for now (again, for about two months).

Lulu often runs specials. They have a coupon code right now — OCTSAVE30 — which gives you 30% off  books and is good through Oct. 10th I believe. No worries though if you wait — they often have coupon codes so they’ll come up again over the next couple of months.

I believe Lulu.com might be better for some European backers since I believe they have better shipping and distribution options for many countries than DriveThruRPG.

Back to the DriveThruRPG issue: I finally found a software method to identify the pesky print-saturation issue on the cover that has given DriveThruRPG hiccups, so now I can address the issue scientifically vs. the trial-and-error method I was using before. Probably another two weeks to get DriveThruRPG printing approved and have the print-at-cost codes to backers. I will give you another update in about two weeks on this.

Also, in about two weeks when we have the final announcements for the print codes, we’ll also be releasing a DIY (Do It Yourself) kit with templates to do you own custom covers for printing at home or through private printings at Lulu.com.

Whew! So happy we’re close to having all this wrapped up and in your hands. Thanks for your support! I’ll give you another update in about two weeks when we should have final proofs in from Lulu, and print-at-cost codes from DriveThruRPG.

Miniatures and More at The War Store