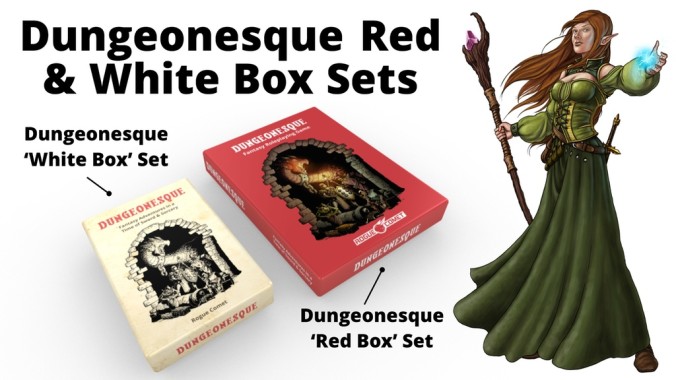 Check out the Kickstarter which just went live!

Wait, wasn’t there already a crowdfund project for Red Box?

Yep. To test the market for interest, we ran a prior IndieGoGo campaign that ended in March to raise money to develop the content for the Dungeonesque Red Box RPG. That crowdfunding project was for PDFs and print-at-cost booklets only, but not boxes or traditional book print runs.

We successfully raised money for that first phase of the product, but customers have been asking for two things: a physical box set, and a White Box digest version of the same content. This new Kickstarter raises money to develop the box set versions with a new White Box format.

A development budget and a manufacturing budget are two different things. Box sets are not cheap to make! We appreciate our backers of the Dungeonesque Red Box RPG IndieGoGo, and to show our gratitude we’ve contacted those backers and are giving them a monetary credit in case they want to upgrade and get products from this new Kickstarter.

(By the way, Fred Hicks from Evil Hat (the folks who created the Fate RPG), wrote a great article about the need for follow-up crowdfunding for physical products).

Backers of our IndieGoGo Dungeonesque Red Box RPG project that ended in March are already slated to get the PDF and print-at-cost versions of the Red Box books, but if backers want to upgrade or get any of the products in this new Kickstarter they’ll get a money credit (either $5 or $10 depending on which level you pledged). Just deduct that amount from your pledge level (for example, if you wanted one of the $50 physical box sets, just pledge $40; we’ll take note that you’ve got this credit from the first campaign).

If you haven’t already, take a look at our newest Kickstarter! We’re continuing our march towards optimizing 5e for old-school play!